I am now contributing safety thoughts and ideas on safetydifferently.com. Here is a reprint of my initial posting. If you wish to add a comment, I suggest you first read the other comments at safetydifferently.com and then includes yours at the end to join the conversation.

This seemingly paradoxical statement was penned by Annie Dillard. She isn’t a safety professional nor a line manager steeped in safety experiences. Annie is a writer who in her book The Writing Life became fascinated by a stunt pilot, Dave Rahm.

“The air show announcer hushed. He had been squawking all day, and now he quit. The crowd stilled. Even the children watched dumbstruck as the slow, black biplane buzzed its way around the air. Rahm made beauty with his whole body; it was pure pattern, and you could watch it happen. The plane moved every way a line can move, and it controlled three dimensions, so the line carved massive and subtle slits in the air like sculptures. The plane looped the loop, seeming to arch its back like a gymnast; it stalled, dropped, and spun out of it climbing; it spiraled and knifed west on one side’s wings and back east on another; it turned cartwheels, which must be physically impossible; it played with its own line like a cat with yarn.”

When Rahm wasn’t entertaining the audience on the ground, he was entertaining students as a geology professor at Western Washington State College. His fame to “do it right “ in aerobatics led to King Hussein recruiting him to teach the art and science to the Royal Jordanian stunt flying team. While in Jordan performing a maneuver, Rahm in his plane plummeted to the ground and burst into flames. The royal family and Rahm’s wife and son were watching. Dave Rahm was instantly killed.

After years and years of doing it right, something went wrong for Dave Rahm. How could have this happen? How can danger be the safest thing? Let’s turn our attention towards Resilience Engineering and the concept of Emergent Systems. By viewing Safety as an emergent property of a complex adaptive system, Dillard’s statement begins to make sense.

Clearly a stunt pilots pushes the envelope by taking calculated risks. He gets the job done which is to thrill the audience below. Rahm’s maneuver called “headache” was startling as the plane stalled and spun towards earth seemingly out of control. He then adjusted his performance to varying conditions to bring the plane safely under control. He wasn’t pre-occupied with what to avoid and what not to do. He knew in his mind what was the right thing to do. 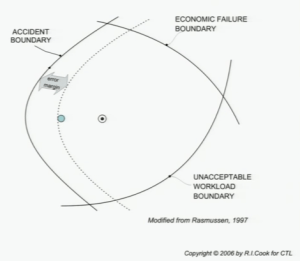 We can apply Richard Cook’s modified Rasmussen diagram to characterize this deliberate moving the operating point towards failure but taking action to pull back from the edge of failure. As the op point moves closer to failure, conditions change enabling danger as a system property to emerge. To Annie Dillard this aggressive head into, pulling back action was how Danger was the safest thing in the world if you went about it right.

“Rahm did everything his plane could do: tailspins, four-point rolls, flat spins, figure 8’s, snap rolls, and hammerheads. He did pirouettes on the plane’s tail. The other pilots could do these stunts, too, skillfully, one at a time. But Rahm used the plane inexhaustibly, like a brush marking thin air.”

The job was to thrill people with acts that appeared dangerous. And show after show Dave Rahm pleased the crowd and got the job done. However, on his fatal ride, Rahm and his plane somehow reached a non-linear complexity phenomenon called the tipping point, a point of no return, and sadly paid the final price.

Have you encountered workers who behave like stunt pilots? A stunt pilot will take risks and fly as close to the edge as possible. If you were responsible for their safety or a consultant asked to make recommendations, what would you do? Would you issue a “cease and desist” safety bulletin? Add a new “safety first…”rule to remove any glimmers of workplace creativity? Order more compliance checking and inspections? Offer whistle-blowing protection? Punish stunt pilots?

On the other hand, you could appreciate a worker’s willingness to take risks, to adjust performance when faced with unexpected variations in everyday work. You could treat a completed task as a learning experience and encourage the worker to share her story. By showing Richard Cook’s video you could make stunt pilots very aware of the complacency zone and over time, how one can drift into failure. This could lead to an engaging conversation about at-risk vs. reckless behaviour.

How would you deal with workers who act as stunt pilots? Command & control? Educate & empower? Would you do either/or? Or do both/and?

Practicing stoicism to make sense of a Complex world, enable Safety to emerge, mentor and learn from colleagues, kids, grandkids

You don’t plan #strategy. You learn it!
Nobody in the history of the Earth has ever planned strategy through a set of analytic techniques. #MwM
#video: https://youtu.be/ieyZH1vwErY